Standing up is a program being run by the WAWAs to encourage women from the community to consider standing for Council.

Women continue to be underrepresented at all levels of political leadership, including Local Government. This has improved over the last decade, however there is still work to be done. In Western Australia, the average representation of women elected to Local Government Councils is 38%.

When women are involved in politics, societies are more equitable and democracy is both strengthened and enhanced. However the greatest obstacles to women’s entry into politics include prejudice and cultural perceptions about the role of women, together with a lack of financial resources.

The Standing Up program aims to increase the number of females elected to Local Governments in Western Australia by:

·         Empowering more local women to Stand Up for election

·         Networking with other women currently elected in Local Governments

·         Providing support during their campaigns

Achieving gender equity in politics will not happen unless women are encouraged to stand and are supported through their campaigning journeys.

In February and March 2003 Marion Blair and Anne Banks-McAllister conducted 14 workshops around Western Australia for women considering nominating for the 2003 elections. This major project was possible due to generous funding from the Department of Local Government and Regional Development, the Office of Women's Policy and the Federal Department of Local Government, Regional Development and Territories.

The project was a success, with a number of women being elected to Local Government at that time and numbers increasing ever since.

Our goal is to increase the number of women Standing Up and nominating for Council, which hopefully helps more women get elected to Local Government, therefore increasing the average % of female representation in Local Government elected offices. Through the Standing Up program, we wish to:

The WAWAs have continued to encourage potential female candidates by facilitating Standing Up workshops leading up to local government elections. These workshops are provided directly by members of the Committee, or through the network of existing female councillors throughout the State. To find out when these are being held, check out our events page.

To make it easier for candidates to run an election campaign, we have created an Election Guide. This guide runs through a number of tips and tricks on how to run a successful election campaign. 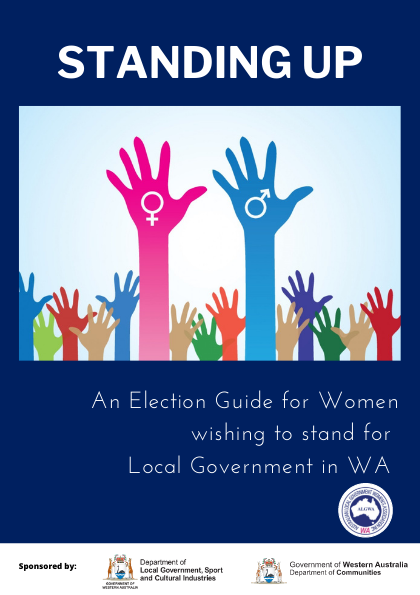 The WA Local Government elections are held every 2 years in October, with the next one due in 2021. Please see the WA Electoral Commission website for dates, eligibility and information about how to nominate for election for your local council.